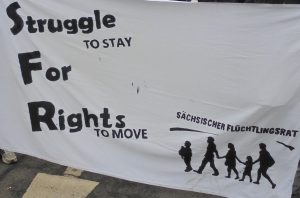 On the occassion of the published numbers on deportations of 2016 by the Ministry of the Interior, Saxon Refugee Council starts with a dossier in German and English on its website. 20 family separations in 2016 compared to four separations in 2015 show how coarsely Saxony deports people. The critical and public supervision of Saxon deportation practice is our objective.

3.377 people were deported by the Saxon Ministry of the Interior in 2016. In comparision with 2015 the number has doubled. In 2016, Saxon Refugee Council and other NGOs were forced to document the violation of one human right after the other, following the relentless pace of the foreigners’ departments.


“The cases  we documented mirror a brutality that has a quality which leaves us in shock.” says Thomas Hoffmann, employee of the Public Relations Department of Saxon Refugee Council. “Concerning the quantity of the cases we assume that the answer of the Minister of the Interior is only the tip of the iceberg. He declares that 20 families (Drs. 6/8097) were separated in 2016. Only, we do not trust those numbers any more. The dark figures will be much higher.” In a press release from November 21st 2016, Saxon Refugee Council pointed out false statements made by the minister. “We accuse the minister of doing everything to shield “Blackbox Deportation” from the public eye. There is no control over the actions of officials during deportations in cities and villages without a vigilant civil society. Apparently, also parliamentary control is suspended.” Another reason for that assumption is the highly intransparent documentation of foreigners’ departments and the Ministry of the Interior regarding the deportation of pregnant women and certified sick people. Their numbers are not recorded.

Saxon Refugee Council will publicly document and critically supervise the human rights violations of 2017. Based on published single cases, the public shall hear from the brutality of Saxon enforcement authorities. Refugees and their supporters find useful information regarding their legal stay. In a comprehensive statement, Saxon Refugee Council positions itself clearly for the Freedom of Movement and the Freedom to Stay. Deportations are only one of the temporary measures that will not give an answer to the question of escape and migration, raised in the 20th century, today in the 21st century. The suffering and the problems caused by them are bearable from the perspective of Saxon Refugee Council. The NGO calls upon everyone who shares its position to stand up against deportations, to participate in their problematization and to support people who threatened by deportation by all means.