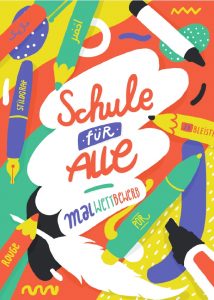 Today our drawing competition as part of the campaign “School for everyone” started. How could a school look like where borders do not play a role anymore? Many kids and teenagers do not have a chance to attend school in Germany. They live in the so-called “first-reception-centers” and lose a lot of time just by waiting and feeling bored until the authorities decide on their destiny. They are refused from attending school. The only reason why they have to live in the reception centers and do not have to go to school: they are from the “wrong” country. Even though they and their parents had good reasons to escape their states are labeled as safe. But this is not so easy to say. At least their parents’ requests for asylum should be fairly checked and decided upon. Though this is just not happening. As a result they stay in the reception centers and often just wait for the police to come and deport them to their countries of origin. This is their future and in future, borders play a huge role. 256 kids and teenagers wait in such first reception centers. 134 of them have been staying there for even longer than three months.

We ask you how a school could look like in which all kids can dream of a future where they can do what they want to. How could a school look like where it does not matter where somebody comes from – a school without borders? What should change, which subjects should be taught and how are they organized? Are school classes from first to fourth grade and from fifth to tenth still a good idea if people are coming and going continually? Are school books still needed when there are so many different languages and internet is existent at schools? How could understanding work when there are so many different languages? Does nowadays education not only mean to know but maybe to understand too? More information about the drawing competition of DGB Youth Saxony, GEW Saxony here.

the whole campaign “School for Everyone”: http://kampagne-schule-fuer-alle.de/