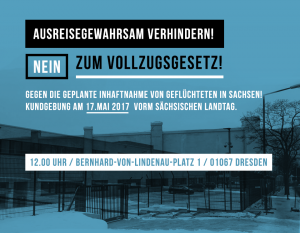 On May 17th, Saxon Parliament will decide upon the Law on the Enforcement of Custody for the Purpose of Deportation. The coalition of CDU and SPD proposed a change of law, trying to make custody “better” (Drs. 6/6352). Some demands of our appeal, that we published with many other signatories, are included. Almost all critical points of Jesuiten-Flüchtlingsdienst are not to be found (statement here, provided for publication). Because of that and out of the following reasons we and others call for protest in front of Saxon State Parliament on May 17th.

The supporters of that call are: