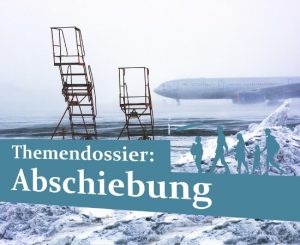 Until now the PDF version of our dossier against deportation was not really what you would call appealing. At least we tried to change that now and updated also the content. Minor inquiries in parliament, our press releases as well as new developments such as the passed custody for the purpose of deportation or the practice of alternative documents replacing the Duldung are to be found in there now. At the end of the dossier you will find a list of all the relevant links for legal advice that appear throughout the dossier. We explicitly want to point out the tipps for doctors’ certificates as well as the information that GEW compiled for teachers for the case that police appears in schools.

Also we call upon you once again: if you know something about deportations and human rights violations that have been enforced in the course of them inform us! As we have written many times already: the Ministry of the Interior is not interested in transparency. To provide at least some monitoring is what we want.