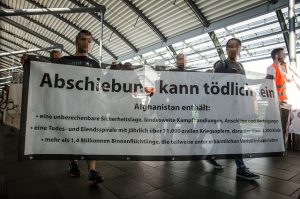 Deportations to Afghanistan? Not with us! 1,674 people signed a petition, addressed to Saxon state government. On January 31st we will hand over the petition in Saxon State Parliament.

It is obvious, that the people who are deported find themselves in a country that is definitely not safe. Only because of the incitement of a few, shouting on the streets and in parliament, democracy, human rights and the right to seek and receive protection are questioned. Those suffer, who did nothing else than escaping.

It’s a joke that only those are supposed to be affected, who committed a criminal offence, who are “threateners” or who made false statements about their identity. Among others, Bavarian Refugee Council again and again proves that people are deported as well, who do not fall into those categories. Apart from the fact, that none of those categories justify a deportation. It’s the Ministries of the Interior on the federal and state level who want to mislead the public! Deportations to Afghanistan need to stop, the escalation spiral needs to end. The next level – deportations to Syria – found it’s way for the first time in public debate already.

So: come to State Parliament on Wednesday, January 31st and speak out against that inhumanity! We’ll start at 3.30pm.